An éclair is an oblong pastry made with choux dough filled with a cream and topped with icing… Or at least that’s what Wikipedia has to say about it. But most of know that an éclair is something far more divine!
I always thought that éclairs were so sophisticated and that they must require quite some effort and quality control in order to get them right every time. So, I decided to get in the kitchen and give it a shot. (Without a proper piping bag!)

The choux dough is probably the hardest part and is actually not that hard at all. It can look like a disastrous mess while you are working on it, but it somehow magically comes together in the end. The real magic happens in the oven, where the pastry rises and puffs up like a balloon. The best part about this is that it’s not like baking a cake, you don’t need to worry about the dough not rising. It just does… every time!  🙂
A professional piping bag will make life easier, but I just used a cheap knock off, which was only good for a single batch.. maybe two.

The custard is easy, but you just need to be careful at the final thickening stage and stir your arm off. Otherwise, you end up with a gruesome, lumpy curdle. I highly recommend you use real vanilla bean pods if you ever want to make custard or vanilla pudding. The difference from using the Cook’s Vanillin Sugar packets (very commonly sold in the Egyptian market as Vanilla) is just incredible.
Stuffing the choux shells with the custard is a bit of a b*tch, especially without a piping bag. But ya, it’s doable.

Last but not least, the icing.. is not rocket science. I just melted some chocolate and dipped my finished éclairs head-first into the sexy, silky coco glaze.

And here they are! #MidosFirst Éclairs

Yeah… they are not perfectly shaped like the store bought ones from Fauchon. But they taste a thousand times better. And quite frankly – for a first time – I am pretty happy with my beginner results. 😀 The best part about making your own homemade, wonky-looking éclairs, is that you get to fill them up with a generous amount of custard cream.
Orgasmic-ally delicious! No wonder it’s called an ‘éclair’ – meaning; ‘to disappear in a lightning flash’ in French.
Did you know that this is the same thing as a profiterole? And cream puffs? A profiterole/cream puff is just round, while an éclair is oblong.
Here’s a cream puff I made, too: 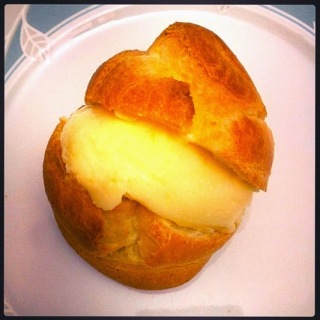 So, there you go. You really don’t need to be a pastry chef at a five-star hotel to be able to make éclairs. There’s plenty of recipes on the Internet. Go on and give it a try. It’s fun (if you don’t have to clean up the kitchen yourself afterwards).