I can’t wait to tell you about the feast I had at Fairmont Nile City’s Saigon last week! A few close friends and I, thought we’d go and indulge on Asian. First, we had all the colorful appetizers you can think of. From sushi to spring rolls and salmon ceviche to shrimp with mango salsa. Two items really stood out from the rest and they were both seared. The sesame encrusted Tuna Tataki with Ponzu sauce was intensely refreshing, while the seared beef rolls with Gomadare sauce (sesame seed sauce) were mildly sweet and creamy with a robust nutty flavor. The sushi rice was a over-seasoned and a little mushy and I wished that the Salmon Ceviche had not been covered in a white, mayo-like sauce as it took away from the brightness that is usually associated with ceviche. Oh! I almost forgot about the Siu Mai… They were simply divine. 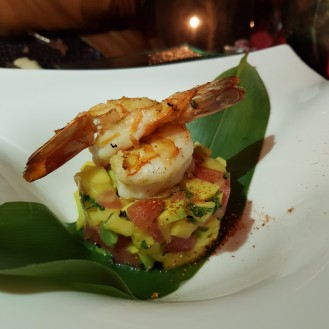 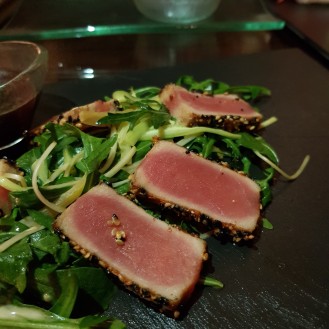 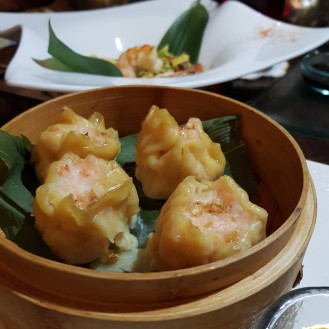 After the appetizers were wiped off the table, we were presented with several restaurant specialties. A shrimp Pad Thai, two shrimp & vegetable fried rice dishes, a beef with Shiitake mushroom and oyster sauce, a green chicken curry and a Peking duck along with all its accompanying condiments. The stir-fries were absolutely loaded with shrimp, the curry was very tasty and we could just not stop wrapping these insanely thin, transparent pancake skins with Peking duck, cucumber, spring onion and plum sauce! 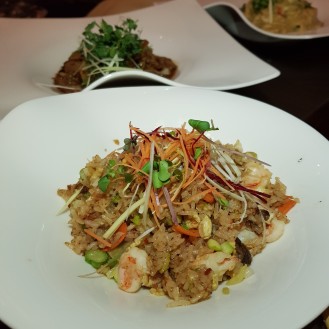 Just when we thought we had seen it all, the dessert started to make its way to us. A very sophisticated trio of Crème brûlée and a triple scoop of mint ice-cream on a bed of mixed, frozen wild berries and a passion fruit coulis. They weren’t lying when they said that the best things come in threes! A classic vanilla Crème brûlée is my absolute favorite dessert, but that was just the first of the three pots in front of us. The second Crème brûlée was Matcha, which I am equally thrilled about every time I see it. The third, was a passion fruit flavored pot of heavenly cream and I never thought that I would love it that much. I hardly let anyone else eat… Now it was time to unbutton my pants and taste the ice-cream in order to cool down the furnace in my stomach. Everything was just so good and I honestly couldn’t stop myself.