It has been more than 15 years since I first walked into our home kitchen and decided to make sushi. Since that messy fiasco of an attempt, my passion for food and my skill in cooking have certainly matured quite a bit!
Let me tell you how it all started and the forces that may have driven me to create this blog…

When I was a child, my family members never really cared much for quality food. My father had been eating pretty much the same meal for lunch for over 20 years (he’s still eating it now – 20 further years have passed since then). A dry and tasteless piece of grilled veal tenderloin, excessively smothered in salt and pepper with a sharp acidic brown lime sauce on top of it, to completely mask what’s delicately left of a flavor in the poor defenseless piece of meat. On the side, there was always a big platter of Egyptian home-style white rice, which is cooked in instant chicken stock, after it is stir-fried in a decent amount of fat first. Sometimes, he would go an extra mile and mix some minced veal Bolognese along with some of the smelliest, stinkiest, saltiest and most fermented cheese on Earth into the rice (more on the cheese in future posts to come). I was never sure what was wrong with all that until I had the guts to taste a microscopic amount of it… Yeah, something was definitely not right! But he loves it!
My mother, who was mostly responsible for the over-seasoned and over-cooked veal that my father ate, actually doesn’t eat at all. She will have a cup of coffee for breakfast and a green salad – with little to no dressing – for lunch/dinner. She also thinks that she’s a vegetarian but what she really is… (I will explain in another post soon).
My little sister, well, she just ate whatever was on that dinner table and she took a lot after my father’s habits. (More on what my sister flourished into in yet another story to come.)
With all that salt, all that pepper, all that seasoning and the lack of quality ingredients, savory flavor and food variety, it was not wonder that at some point in time – I must have been somewhere between 8 and 10 years old – I simply stopped eating whatever they cooked at home! I only really enjoyed food when I was eating at a restaurant or somewhere abroad.

Until one day, while I was in high-school, a very dear half-Japanese friend decided to invite me over for lunch at her house. To my luck, her mother had made some traditional Japanese food that day. It was not the first time I ate something different but it was definitely the first time I try something so exotic and far from what I was used to at my house.
When I first saw it and smelled it, I was slightly worried. The noodles were gelatinous and transparent, the vegetables had been slightly discolored by the soy sauce, as opposed to the reddish tomato-paste-tint I was used to from Egyptian-style vegetables and the aroma of the seaweed gave the whole dish a somewhat fishy note. Nevertheless, I grabbed a pair of chopsticks – which I had gotten used to eating with at Chinese restaurants, a while back – and dug right in, for my taste-buds were craving just about anything new with exciting potential.
As soon as the morsel, which I had picked up with the chopsticks, rolled around my mouth and came in contact with my tongue, I’m pretty sure I made the same face that Anton Ego (“The Grim Eater”) made when he first tried Remy’s Ratatouille in the formidable 2007 Disney and Pixar animation of the chef rat. The flavor was incredible beyond words could ever describe. It was sophisticated, savory, sweet, balanced and ultimately unique. It felt like I had been waiting for this exact taste all my life and that everything else I ever had before that bite was either too salty, too sweet, too bitter or too sour! 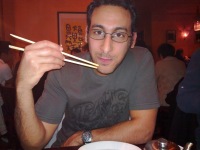 Then, and only then, did I seriously start to wonder: What makes some foods taste better than others?!

Keep following my food blog as my fingers tell you more about what I eat, what I cook and what I discover about food every day.